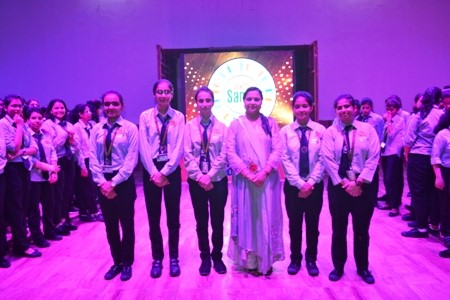 The university organized the event in a grand manner to campaign for the aspiring leaders of the university. Prior to the election of the students, all the nominated students expressed their views through their powerful speeches. The huge crowd of the students has made this annual election program a Great success. students were made part of this entire democratic process.
The event was then followed by the oath taking ceremony by the newly elected Jayoti Sangh (Student council) members in the presence of University Hon'ble Chairperson madam JV'n Vidushi Garg Ji

The Founder and Advisor of the University, Hon'ble Dr. Panckaj Garg Ji, while addressing the students said that Jayoti Sangh Elections is not competing to become the election leader, Leadership is an opportunity to serve, this is an opportunity for the elected students of Student Council to enhance their overall personality, their leadership quality and at the same time serve selflessly.